Chat with us, powered by LiveChat Why learning Sanskrit will greatly impact your Yoga practice as student and teacher 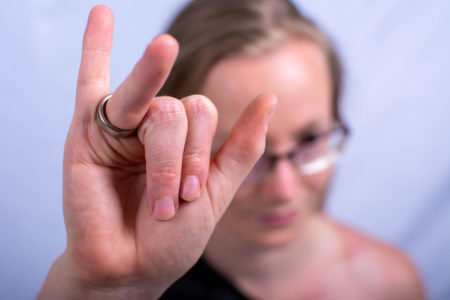 ‘Language is culture and culture is language’. A phrase I heard throughout my studies of history at university. It suggests that understanding the language of any society, ancient or modern, is paramount to understanding its culture and vice versa.

That is why I will argue in this blog, from my personal experience as a white western Yoga student, why studying (the basics of) Sanskrit will unlock deeper levels of understanding AND will help western yoga teachers and practitioners to appreciate instead of appropriate Yoga.

Before becoming a Yoga teacher (eternal Yoga student) at Himalaya Yoga Valley, I studied history. My specialization became Graeco-Roman Times. Learning ancient Greek and Latin opened impressive doors to appreciating ancient Greek and Roman lives to a much greater extent, because I could do their stories, experiences, inventions and so on more justice. After all, no matter how self-aware we are and knowing that our work will always be subjective and biased, the goal of a historian is to approach historic reality as closely as possible. In my view, adopting such an attitude in our daily lives, on and off the mats, will prove to be extremely helpful. Ultimately, it is curious to teach an ancient science from another culture without understanding that culture on a basic (or deeper) level.

Patañjali (remember that he is not the only one who writes about yoga!) wrote in Samadhi Pada:

Misconception is false knowledge [of an object] without firm standing its form.

A common explanation for this sūtra is someone mistaking a rolled-up rope for a snake. So, too, do many yogis mistake Yoga for only āsana.

So where does all of this leave us when we enter the massive and at times confusing realm of Yoga? I grew up in a Christian society. Thus, although not following Christian faith, I am heavily influenced by Christian norms and values. In other words, Yogic, or perhaps better said, Indian cultural codes, often expressed through language, are foreign and mostly unknown to me. One of various ways of making that what is ‘foreign’ or ‘strange’ more ‘familiar’ is to learn India’s ancient language: Sanskrit.

Arguably, Sanskrit can be termed the Language of Yoga, because most (not all!) texts, scriptures and manuscripts about Yoga have been written in Sanskrit. Let us use the word Sanskrit, to explain parts of Sanskrit!

What does Sanskrit mean? The word Sanskrit or संस्कृत-, saṃskṛta, is made out of two words, saṃ & kṛta. The former means together, good, complete, perfected and the latter stands for made, performed. Together it means something along the lines of complete, whole, perfected language.

You probably wonder why we say Sanskrit/Sanskrita and not saṃskṛta? There are two reasons. Firstly, Sanskrit is a language that emphasizes sound, vibrations and intonation. In so doing, it is understood to be efficacious, or that the sound and its expression has effect on the world. This effect can be created through performance, Vedic ritual(s) and especially recitation. In other words, pronunciation matters! Therefore, Sanskrit knows several sound classes and sometimes they ‘clash’ which is called sound conjunction (sandhi). When this happens, a morphological change occurs: saṃ + kṛta becomes Sankrita. What this change does, is that it keeps the sound effective and efficient. Otherwise, the reciter has to change from, say, back in the throat sounds to dental sounds, which makes it very hard to keep it flowing. Secondly, during colonial times, Sankrita became angelized to Sanskrit.

Next, lets discuss what is known about Sanskrit’s origins. Do be warned, some debates are pretty heated, political and potentially triggering. I will mention them, though, without participating in them, because I think it is important to be aware of them.

What is unchallenged is that Sanskrit is one of the oldest, still actively used (!) languages in the world. It is over 3000+ years old. It’s origins, however, are mysterious and heavily contested.

In cultural Anthropology there are two important concepts, namely emic and etic approaches. An emic approach is to investigate how local people, indigenous people perceive and categorize their world, their cultural codes and rules of behaviour on their own terms (internal view). An etic approach is the description or analysis of a given culture’s behaviour, rules etc. by an anthropologist, historian, or scientific observer (external view). As we shall see, sometimes, these two approaches clash.

Sanskrit, by tradition is believed to have been divinely ‘heard’ by the Vedic Ṛṣi (‘seers’) in the Vedas. It is therefore understood as the dēvavāṇī (देववाणी), or the language of the gods, which is eternal and beginningless.

Scholars, starting from the late 18th century onwards, however, endeavoured to figure out where Sanskrit comes from, because they realized that the language is very closely related to other Indo-European languages – especially regarding grammatical structure, shared verbal roots and cognate words (more about this later).

This is also the point where it gets slippery and potentially messy. According to scholars, the earliest Sanskrit speakers (they identified themselves as aryans (ārya = pure, noble), not to be confused with Nazy Germany) came from outside of India, somewhere above modern-day Iran / Baltic area. They then migrated or (violently) invaded, depending on your point of view, downwards towards north-western, south Asia or modern Afghanistan and Pakistan. From there they moved to north-west India. For many Indian people this explanation is understandably extremely (politically) problematic, because it would mean that Sanskrit is not native to India but brought to India by invaders. Instead, they propose that Sanskrit does originate from India and then migrated and mixed with other languages, hence the similarities. 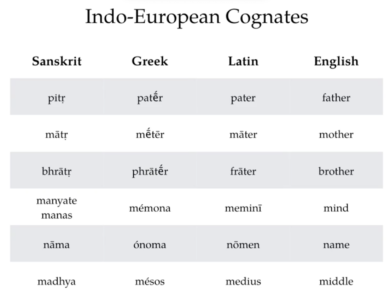 As you can see, the Sanskrit words are closely related to ancient Greek, Latin and even English! Sanskrit has cases and gender just like German. What is profoundly different, however, is that these other languages do not seem to have this efficacious quality of having impact on the world, through sound (Vedic Sanskrit had even specific characters that referred to tone or pitch, which were later omitted in classical Sanskrit texts).

Wrapping up, most texts about Yoga are written in Sanskrit. Yogis typically tend to meditate and to chant, using Sanskrit. The advantage of knowing (the basics of) Sanskrit is that you are more independent from translations, as they are also subjective interpretations. It will be easier to remember the names of various āsana and prānāyāmā techniques, as well as provide you and your students with more and proper context. Additionally, chanting will become a different experience once you learn how to pronounce the words properly (yes, chanting sounds somewhat different in Northern and Southern India), giving Sanskrit the opportunity to become efficacious once more. Even the universally known sacred syllable ‘Om’ / ‘Aum’, there is much more to it than meets the eye! On top of that, through Sanskrit, Yoga’s roots and culture will become more accessible and less ‘unfamiliar’. In doing so, we, as white western yogis, learn to appreciate Yoga rather than to appropriate. 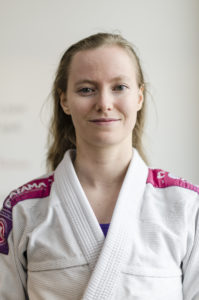